Mahalia Stines is a Brooklyn based Fiber Artist and Culture Conservationist. Although formally trained as a Costume Designer at the French Fashion Academy with the Great Carole H. Beule, Mahalia has always had a strong interest in Fiber and its infinite possibilities and applications, an interest that grew from watching the Russian-Haitian Artist Tamara Baussan at work.

In recent years her practice has evolved into the production of Large scale Art Quilts, small mixed media collages and wall sculptures, incorporating the various fiber processes and skills she’s acquired over the years, from weaving, felting, embroidery, quilting to beadwork and exploring themes as varied as Mother Nature’s chaos to History.

Cultural elements from her Native Haiti often feature prominently in her work, she firmly believes that Culture is our greatest natural resource, therefore sharing the vibrant culture of Haiti is becoming a Mission. She continues to design costumes, for the last four years for Durham based Gaspard & Dancers and Brooklyn Based Fanmi Asòtò.

Fanmi Asòtò is a Haitian cultural organization whose drum performance, community workshops, and herbal teachings are rooted in Vodou. Paying homage to the asòtò drum, the mother of all African descended drums, their mission is to encourage identity building for all Haitians but particularly for Haitian American youth who are the next generation of Haitian culture and Vodou. Created in 2014 by Sirene Dantor Sainvil, with the support of her husband and master drummer Jean Guy “Fanfan” Rene, Fanmi Asòtò seeks to develop a sense of pride within the Haitian community in a way that people of all backgrounds can be attracted to. 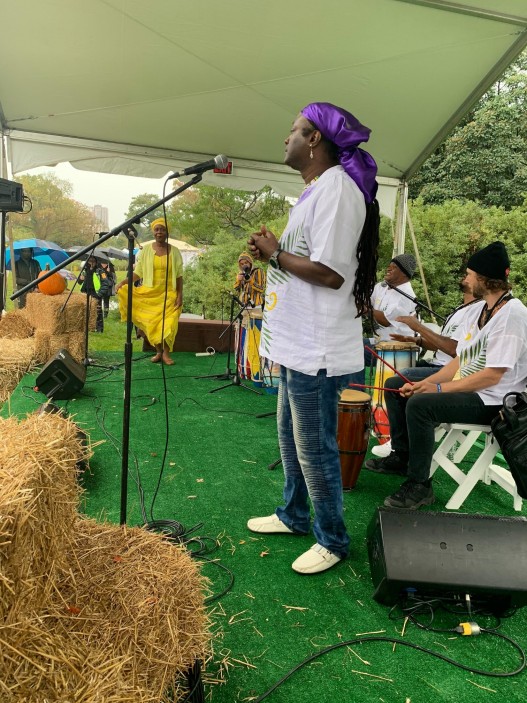