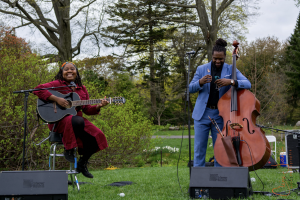 On Sunday, April 17 at Brooklyn Botanic Garden, upright bass player, Jonathan Michel, celebrated Haitian women composers with special guest singer and guitarist, Talie Cerin. The two performed numerous original compositions from Talie’s latest project “Solèy Midi,” as well as an original composition by Jonathan which he created during his time as a Lakou NOU resident in 2019.

The duo closed their set with a song composed and performed by Emeline Michel and many began singing along to the familiar tune. The audience enjoyed the music on the lawn while the sun peaked through the clouds, setting the tone for a beautiful Sunday filled with music and Haitian culture. 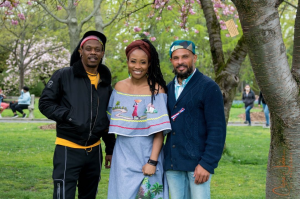 On Sunday, April 25 vocalist Mia, percussionist Okai Fleurimont and drummer SeeYou performed traditional Haitian folksongs and drumming. The trio opened with an acapella piece followed by several mid-tempo arrangements including some commonly known traditional songs. Toward the end of their performance, they invited several audience members to join them on stage where they danced to upbeat traditional Haitian drumming. They ended their performance with a beautiful traditional piece that the audience enjoyed. Everyone was so pleased to be at in-person programming, and it could be felt by all. 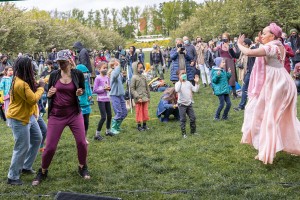 It was a rainy day on Saturday, May 8 at Brooklyn Botanic Garden. Thankfully the rain cleared up just in time for Riva Précil, Monvelyno Alexis and Markus Schwartz to perform a number of Haitian songs both original and traditional. The crowd grew gradually and the sun came out to warm everyone up.

HCX director Régine Roumain gave opening remarks and introduced Commissioner Mitchell Silver who spoke briefly about the importance of being outdoors together in community and share some personal memories of his own at the garden as a young boy.

The band began their set with an opening song which required clapping and the audience happily obliged to accompany them while singing along. Riva taught a number of Haitian rhythms and dance moves, explaining a bit about each, emphasizing the harvest dance and songs about natural remedies found in nature. By the end of their performance, everyone was on their feet dancing. There were lots of children in the audience who enjoyed following along and creating their own dance moves. 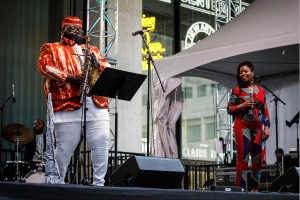 On the evening of Friday, May 21st HCX partnered with Restart Stages at Lincoln Center in celebration of Haitian Heritage Month, presenting vocalist Pauline Jean and saxophonist Godwin Louis accompanied by Axel Laugart on piano, Jonathan Michel on bass, Allan Mednard on drums, and Markus Schwartz on percussion.

The audience sat in pairs at this open-air event overlooking the tranquil waters and courtyard of Hearst Plaza. Founder and Executive director Régine Roumain gave an opening remarks stating: “We recently celebrated the 218th anniversary of the Haitian flag upheld by our motto of liberty, equality, and fraternity. We are very proud of Haiti’s unique history and heritage as the world’s first black led republic and first independent Caribbean state. The history of Haiti and the rich diversity and creativity of our culture and artist are important and necessary reminders of this. Our art, our culture, and people play a very important role in New York City and the world.” Roumain went on to thank Lincoln Center’s entire team as well as HCX’s present team members and Haitian artists who “continue to lift our hearts and spirits through their work.”

The band set the tone by opening their set with an excerpt of the Haitian National anthem “La Dessalinienne”. Godwin Louis played the melody on saxophone and the rest of the band joined in. They engaged the audience by instructing them to stand on their feet and join in with some Haitian dance movements while they played some upbeat tunes and incorporated traditional wind instruments called “Kòne.” The evening ended on a high note as the band closed with a medley of lively traditional tunes.

Watch the live performance on our Facebook page here