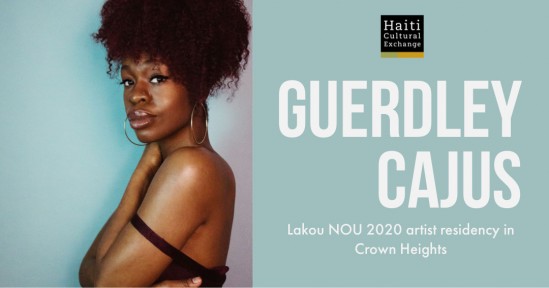 Guerdley Cajus (Crown Heights) is a creative spirit with Haitian roots from Cambridge, MA. Inspired by the divinity of dance, she enjoys using performance art and creative writing as a medium for healing and emotional exploration. Raised on the sounds of Haitian Kompa music and 90’s R&B, Guerdley organically developed an understanding of the great role body language played in expressing untold stories. Guerdley studied Sociology, Women’s Studies, and Journalism at Pace University. After graduation, she worked as a Freelance Journalist, and now fuses her passions for storytelling and movement.

Guerdley is a co-founder, choreographer and dancer for Queen Moves, a dance empowerment collective for self-identifying Queens. She is also a Doula IT and taking great interest in the parallels of birth work and creative expression and the ways in which they take space in the feminine form. For the past 7 years she has been a Master Teaching Artist and Dance Educator Mentor within the New York City public school system.

Guerdley is collaborating with non-profit Famn Saj to create an online movement class that confronts the ongoing erasure of Black, Indigenous, People of Color (BIPOC) voices by placing a lens on the untold stories of Haitian people. In these workshops, individuals’ stories will inspire movement that reclaims power and facilitates healing. Participation is open to anyone who stands in resistance to BIPOC erasure. Movement classes are online and open-level. To participate, please register at www.guerdley.com/lakounou

Guerdley spent the “Listening Phase” of her project interviewing 13 women about their Haitian identity and experiences of cultural erasure. She opened each conversation with the question, “When did you learn about the Haitian Revolution?” Guerdley then built the structure of her workshops around the experiences described in these interviews.

This spring, Guerdley will work with professional dancers and some of her workshop participants to create a dance video inspired by her participants’ stories, which claim space, counter erasure, and promote healing from trauma. She is collaborating with Haitian artists such as Steven Baboun and Jonathan-Dexter Albert to create a dance visual that celebrates the resilient and divine feminine energy of Haitian women. Guerdley is currently inviting Haitian dancers who would like to be featured in this visual to reach out to her hi@guerdley.com