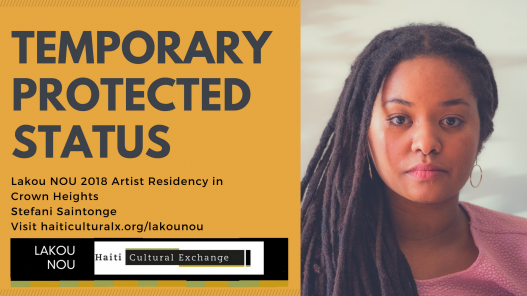 Stefani Saintonge (Crown Heights) is a Haitian-American filmmaker and educator. In 2014 she won the ESSENCE Black Women in Hollywood Discovery Award for her short film, Seventh Grade. Her documentary, La Tierra de los Adioses, won Best Latin American Short Documentary at the Festival Internacional de Cine en el Desierto. Her work, which focuses on women, youth and immigration, has screened at several festivals in the US and abroad. A member of New Negress Film Society, she is a recipient of the Jerome Foundation Film and Video Grant, and works as an educator and adjunct professor in New York. She holds an MFA in Documentary Film Studies and Production.

For her Lakou NOU project, she intends to research current TPS holders as well as community leaders and activists fighting to have it extended.

There are currently 58,000 Haitians with Temporary Protected Status (TPS), with 20,000 living in New York. The US granted TPS in response to the 2010 Haiti earthquake, which declared that any Haitian immigrant residing in the US without permanent residency could apply. The Obama administration had consistently extended the program, but the Trump administration intends to put a stop to it leaving the 58,000 at risk to losing their documentation. TPS is due to end by July 2019 making this year a crucial moment.

From May to August 2018, she will work within Brooklyn particularly Crown Heights to gather anecdotes from TPS holders and their family members documenting their journey to the US, their work since arriving here and their current state in order to highlight the human stories behind this issue. The interviews will be conducted on and off camera depending on the comfort level of participants. She will also interview people in Haiti inquiring on their plans in case their family member is forced to return.

In addition, she will conduct on-camera interviews with experts and community leaders.

She plans to bring together the TPS families she would have been working with for 2-3 private events where they can meet each other, connect and share in an attempt at collectivizing. She will invite a community organizer for one event to do training on self-advocacy, and, an additional event will feature a community healer for a group talk on strategies for managing anxiety amongst state violence.

During her final project event, she will present the resulting footage at a space in Crown Heights for a public, educational forum on the current status of TPS to inform audiences interested in the struggle. The event will blend facts, personal anecdotes, excerpts from interviews and observational footage. She will also invite willing TPS holders as well as community leaders to participate in the forum.

The goal at the end of her residency will be to generate an audio/ visual record of current Haitian TPS holders as well as use the collected footage as foundational research for a possible in-depth film to be completed in the future.