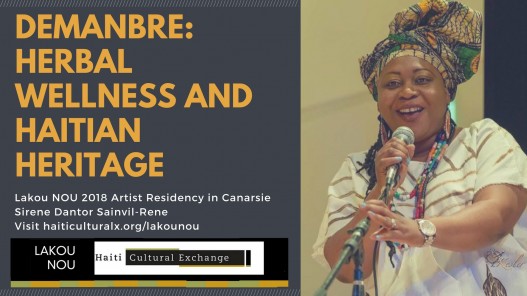 As part of  her Lakou NOU 2018 residency, she is developing research to answer the question: Where is the heritage of Haitian people in Canarsie preserved? How do we participate in it?

Her goal is to use her skill as a Haitian culture preservationist, singer, and Vodou herbalist to learn about the culture in Brooklyn communities, document the changes in Canarsie, and encourage people to visit Canarsie spaces. She seeks to create spaces for community dialogue through her “Fey Nan Bwa” workshops.

These workshops will take place in each of the four main Lakou/Haitian communities delineated through the Lakou NOU program – Flatbush, East Flatbush, Canarsie, and Crown Heights. They intend to create a space where people can talk, learn about tradition, and share stories about their history in Brooklyn and in the Canarsie community.

Sirene says, “At Fey Nan Bwa people, Haitian and otherwise, coming out learn about things they never knew. It is a way to have people be in fellowship with one another.”