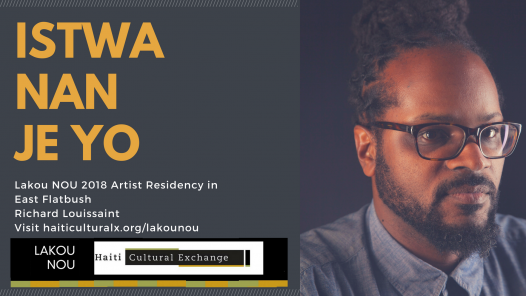 Places, whether it be a childhood home, the local bodega, the park you spent your days during long summers, hold some sort of significant memory that seem insignificant until you recall it.

Louissaint’s culminating Lakou NOU event will feature an exploration of change and history in Haitian East Flatbush through the words of Haitian organizations and businesses. With special guest Herold Dasque, Community Relations Consultant for Haitian-Americans United for Progress.

Follow the progress of Istwa Na Je Yo here.

Richard Louissaint (East Flatbush) is a first generation Haitian-American filmmaker and photographer from New York City. Growing up in Queens, he was exposed to a wide spectrum of the Caribbean diaspora but was primarily influenced by Haitian and African-American culture. His obsession with music led to him to writing for music magazines and websites before pursuing a career as a photographer and filmmaker. His work centers on  people of color, especially those of Haitian descent,  through portraiture, film and documentaries. He has been published in Wax Poetic Magazine, MTV and the New York Times.  His work has been exhibited at the Brooklyn Museum, Wilmer Jennings Gallery at Kenkeleba and he had his first solo show in Petionville, Haiti in 2014. His films have screened at the Haiti Film Fest, New York Short Film Festival, and Newark International Film Festival. Richard also holds a MFA in Creative Writing from Brooklyn College.

Richard is interested in the idea of place memory. He explains that “place, whether it be a childhood home, the local bodega, the park you spent your days during long summers hold some sort of significant memory and some that may seem insignificant until you recall them.” Considering this, he seeks to build an interactive visual project that addresses how place memory can be influenced by rapid gentrification. He asks, “how can you retrieve…memories from a space that has been turned into a looming 40-story glass building?”

As his primary course of action, Richard will communicate with businesses in East Flatbush – young and old – to document their stories, their perceptions of the community, and to help enforce their ability to succeed. This work is timely as it occurs with the launch of the Little Haiti Business and Cultural District. Richard hopes to use this as a launching pad for building connections with his lakou.

The information he collects will help to create a digital app, accessed through a unique QR code for each business. He says, “I want the archive to live online and be something that can be updated with other businesses in the future. I want it to evolve as more innovative technologies get refined for more immersive experiences. That could mean 360 videos of the business spaces or user contributions that can create a shared experience.”